What are the Effects of Spice Abuse?

In late 2018, there was a surge in dangerous and fatal overdoses of synthetic marijuana, also known as Spice. Spice is also marketed as K2, Scooby Snax, and Kronic. The drug is made out of shredded plant material that is then sprayed with a synthetic cannabinoid. Mostly, users smoke or vaporize Spice to get a high similar to marijuana. But Spice comes with a risk of several severe side effects, and it’s possible for users to overdose on the drug fatally. In New Haven, Connecticut, over 70 people overdosed on Spice within two days.

Even though many states in the U.S. have legalized marijuana for recreational and medicinal use, the DEA still considers marijuana a schedule one substance. The active ingredient in cannabis that gets someone high and can be addictive is called THC. THC is a cannabinoid compound. Black market chemists have attempted to create a synthetic form of THC, which causes alterations in perception and other physical side effects. These artificial, lab-made cannabinoid chemicals are the active compounds in Spice or K2.

What is the history of Spice? 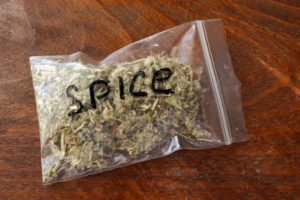 Initially, the synthetic cannabinoids in Spice were made for scientific research. But drug manufacturers have managed to reproduce these chemicals and sell them to users. What makes Spice so dangerous is that the drug has a similar, opaque legal status to bath salts. The chemical recipe used to make Spice and also bath salts is continually changing. Dealers can sell these drugs in convenience stores and head shops by marketing them as “incense.” Once officials catch on and make the product illegal, enterprising black market chemists change the drug’s chemical makeup once more and manage to evade the reach of the law.

In 2004, Spice was introduced and sold in London, England. Soon after, Spice entered the U.S. market and became widespread in 2008. The drug was able to evade law enforcement by sporting labels that said, “not for human consumption.” But sellers and users both knew that the product was only intended for illicit use and for getting high. In general, Spice is marketed as a “legal” substitute for marijuana. In addition, Spice is sold as a harmless substance that is non-addictive. But this is not true. Although Spice and K2 are laced with synthetic cannabinoids designed to mimic the effects of THC, the side effects of synthetic cannabinoids are more pronounced than those found in natural THC.

How is Spice dangerous?

The synthetic compounds in Spice possess more addictive qualities than natural marijuana. Also, natural marijuana can cause someone to experience a brief, and usually mild, episode of psychosis. Once the pot high wears off in a few hours, the psychosis dissipates with little to no lasting side effects. But psychosis in Spice consumption is much more severe and long-lasting. Spice users can experience psychosis for days after using Spice or K2. Psychosis is not a mental health disorder but a symptom. People who have psychosis will believe things that aren’t true, and their beliefs will cause them to experience a break with reality. Getting high on Spice can increase a person’s risk of suicide or violence toward others. Paranoia, panic attacks, hallucinations, and agitation are common when someone experiences a high from Spice. Other common side effects of Spice can have a severe impact on a person’s physical health:

Despite these severe and distressing side effects, people can go on to chronically abuse Spice and become addicted. People who are addicted to Spice will experience withdrawal symptoms, such as headaches, anxiety, irritability, and depression.

Who is most likely to abuse Spice?

Spice abuse and addiction are most common among adolescents and young people. Spice can be easier for younger people to obtain than illegal marijuana, and it can also be less expensive than marijuana. Some surveys have uncovered that up to 11% of U.S. high schoolers have used Spice within the past year. 75% of all hospital ER visits related to Spice abuse occurred among people ages 12 to 29.

Why would someone abuse Spice?

People who are addicted to natural marijuana may use Spice as a substitute that is cheaper and sometimes more readily available than illegal pot. Marijuana users may also use Spice as a way to get high while averting a positive result on a drug test since Spice will not show up on most regular drug screenings.

Researchers have uncovered that most people use Spice and other synthetic drugs like Bath Salts because they are unaware of the dangers of these drugs. The fact that users can find these substances for sale in a store leads many to falsely believe that the drugs are not dangerous. Still, some people are attracted to the idea of experimenting with something that promises a new, altered experience and euphoric sensations. Marketing and propaganda also lead users to believe that Spice is non-addictive and not dangerous since it is sold in a store.

What can be done to help people with an addiction to Spice?

People who are addicted to substances like Spice will need to go through a detox and withdrawal process to rid their body of toxic chemicals and end a physical dependency on the drug. Because the side effects of Spice withdrawal can be painful and distressing, people in recovery can significantly benefit from undergoing a medically-assisted detox. Doctors can prescribe safe, alternative medications to help the body wean off Spice. Medications can also be used to lessen the severity and duration of withdrawal symptoms. Drug addiction is a lifelong, chronic illness. People in recovery for Spice addiction will need to participate in ongoing maintenance programs to lessen the risk of relapse.

If you or a loved one are addicted to Spice, it’s never too late to get help for drug abuse and addiction. The clinicians and doctors at Windward Way have helped dozens of people beat their addiction to Spice and other synthetic drugs, and achieve sobriety. Please contact the addiction specialists at Windward Way to explore your options for treatment.