Ecstasy, also known as MDMA or ‘molly,’ is a drug derived from amphetamines. It is highly addictive and known to produce a combination of effects not seen with other street drugs. Ecstasy is a unique drug in that it induces the stimulant-like effects of amphetamines, but with hallucinatory effects similar to those produced by mescaline.

Ecstasy use can also be deadly, causing the user to be unable to control body temperature. This can lead to cardiac arrest or brain damage.  It lowers inhibitions and induces feelings of euphoria and closeness, which can lead to risky behavior. It can cause fatal accidents.

Detoxing from ecstasy can be painful, preventing the user from seeking help. Getting detox help for ecstasy withdrawal pains is the best path to lifelong recovery.

How strong will withdrawal be when I quit taking ecstasy?

The strength of ecstasy withdrawal symptoms is concomitant on the user’s level of dependence on the drug. Other factors include things like the amount of time a user has been taking the drug, their genetic traits, any other medical or mental conditions they may have, and how they consumed the drug.

Medical research studies show that the more dependent the user is on ecstasy, the harder and more painful the ‘come-down,’ or withdrawal from it. Tremors, teeth clenching, nausea, chills, sweating, and dysphoria can be particularly burdensome symptoms for a user to deal with on their own.

Getting help for ecstasy withdrawal pains in a medical detox facility can greatly reduce the severity of these symptoms. Staff is trained on how to recognize these symptoms, reduce their severity, and aid the user with care, support, and counseling.

If left on the street, users are at risk of self-medicating these symptoms, replacing one drug with another. Detoxing in a controlled environment greatly reduces this risk.

What are the symptoms of withdrawal?

Ecstasy withdrawal symptoms can mirror those of methamphetamine. Symptoms of withdrawal may include the following:

What withdrawal symptoms last the longest or show up later?

The pharmacology surrounding ecstasy is complex. Amphetamine derived drugs, such as ecstasy, affect the release of neurotransmitters, e.g. dopamine, serotonin, and noradrenaline.

Ecstasy blocks the reuptake of serotonin, the chemical responsible for regulating mood and happiness. This can induce clinical depression in the user. At worst, long-term problems regulating mood can haunt the user for months after cessation.

Ecstasy withdrawal has been shown to impact users with long-term, psychiatric issues. These include things like depression, recurrent paranoia, panic attacks, and memory problems.

Depression as a symptom of withdrawal is likely to manifest later within the cycle. It is considered a potentially deadly side effect, with the individual in recovery at increased risk of suicide.

Can I detox faster from ecstasy if I go to a detox facility? 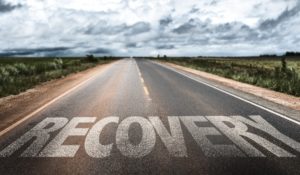 The physical symptoms related to ecstasy withdrawal end more quickly than psychological symptoms. But, there is no way to rush the process. However, detoxing from ecstasy in a safe, secure medical detox facility can lessen the severity of some of the symptoms. It is also safer for the user to recover in a structured, supportive facility so they can be monitored for depression and the risks associated with it.

Also, those in recovery can be supervised by caring and trained counselors to deal with the potentially deadly side effect of depression and anxiety that can accompany withdrawal. Depression is a painful condition but can be managed and the symptoms lessened with help from experienced counselors.

In addition, medical detox facility methods are backed by proven scientific research, and the staff is extensively trained on how to best help their patients recover from addiction.

Getting detox help for ecstasy withdrawal pains is shown to increase the likelihood of life-long recovery. Windward Way, an accredited rehabilitation facility, has helped thousands of people recover from ecstasy addiction.

By far the most important feature of Windward Way’s MDMA (ecstasy) detox center is our dedicated staff. In fact, it’s the opposite of what you might find in a low-quality rehab. Instead, Windward Way’s medically supervised MDMA detox has both the comfort and the safety of our clients in mind. Since ecstasy is such a powerful drug, our detox embeds a firm footing for your eventual MDMA addiction rehab.

Actually, the process for admission is really quite straightforward. Click on a link or call us now to invite us to be your partner in recovery. Withdrawing off this drug shouldn’t have to be something you do alone. Get your life back with Windward Way’s highly praised drug rehab. Thousands of people just like you have been through our program. Call us and you can be one of our proud alums one day as well: 855-491-7694.

At Windward Way, anyone can plainly see that both our committed staff and also our dually accredited program are what make a difference for the guys in our program. In fact, our staff almost glows in the excitement they have for recovery. We want to be your rehab center for ecstasy addiction. Because the experts here are well-acquainted with addiction types that young men struggle with, you also can be confident that you will receive only the most informed, highest value addiction treatment possible.

Treatment for addiction doesn’t have to be a bad experience. Instead, alums of our MDMA rehab center often tell us the time they spent in Windward Way’s addiction treatment program was one of the best in their lives. Our intake reps will give you the attention you deserve and the answers to the questions you have about Windward Way. Since we’re here 24/7, pick up the phone and dial 855-491-7694. Don’t wait—your recovery can begin right now.