According to The National Survey on Drug Use and Health, 27.1 million individuals in the United States abused prescription pills or had taken illicit substances in 2015. This tendency has led to a significant increase in overdose deaths, with an estimated 47,055 drug-related deaths being reported by the Center for Behavioral Health Statistics and Quality in 2014. For roughly 60% of them, the cause was opioids (heroin and prescription drugs.) The data gathered in Orange County shows similar trends to nationwide substance abuse statistics, with the Orange County Health Care Agency reporting an increase in drug-related overdose deaths (of 88% between 2000 and 2017). While the two trends are comparable, the OCHCA notes that some notable differences and risk factors have been identified for the OC residents.

Men were two times more likely to be hospitalized than women for drug or alcohol-related incidents. At the same time, the death rates are also higher for men than in the case of women. Cities in the southern and coastal region seem to have higher drug and alcohol hospitalization rates and deaths than other cities. Additionally, the following was reported by the agency :

Regardless of the similarities between the Orange County and national trends, drug and alcohol abuse is still a great cause for concern both at the government and public levels. Numerous programs have been introduced, both by public and private entities to keep addiction rates under control and reduce the number of overdose deaths.

Addiction and Abuse Statistics for Drugs and Alcohol in the OC

In a study published in 2012 by the Orange County Health Care Agency, alcohol use trends were tightly linked to gender and ethnic background. Men typically consumed more alcohol than women, with white adults being among the biggest consumers. Prevalence increased with age, the 45-64 age group peaking in alcohol consumption compared to other groups.

Regarding social demographics, it is reported that the more educated and financially stable adults scored a higher consumption rate than those with a lower income and educational status. Roughly 10% of surveyed citizens reported having been heavily drinking before driving a car at least one time in 2012.

The survey focused on six categories of illicit drugs (cocaine, marijuana, heroin, various hallucinogens, methamphetamines, and club drugs), as well as numerous types of prescription medication. Here are some of the results for each category.

The study identified four different classes of prescription drugs that OC users took for nonmedical reasons – pain relievers, stimulants, sedatives, and tranquilizers. Almost 6% of adults said they misused prescription medication at least once in their life. In 2012, the rate of use dropped to only 2% (53,000 of adults).

The report shows that 34% of OC adults used one or more illicit drugs in their lifetime. Moreover, 5% of them reported taking an illicit drug in the month leading to the time of the survey.

Marijuana is the most popular drugs used in the OC, with 33% of adults saying they use it regularly;

Heroin prevalence among adult OC users registered at only 1% (about 33,000 adults). 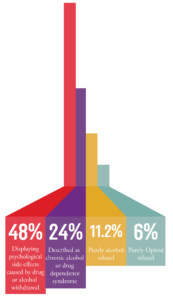 Studies show that the hospitalization rates for alcohol and drug-related issues in Orange County have not shown any significant improvement since 2011. Almost half of the hospital visits (48%) were patients with symptoms displaying psychological side-effects caused by drug or alcohol withdrawal. Almost 24% of these visits were described as chronic alcohol or drug dependence syndrome. The most common contributor to hospitalization was alcohol (11.2/%), followed by opioids (6%). 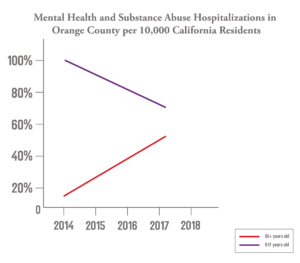 In 2014, there were 51.4 mental health and substance abuse hospitalizations in Orange County per 10,000 residents. The trends seem to be more encouraging than at state level (with 61.1 hospitalizations per 10,000 California residents), and the rate has been relatively consistent through the past ten years. However, the data suggest that the rates have changed for two groups:

Depression has been the leading cause of hospitalization for mental health-related issues in Orange County. It is very common for people with either psychiatric disorders or substance abuse conditions to end up in hospitals, mostly due to the lack of knowledge on the resources they can use for their conditions (such as detox facilities, therapy groups, etc.).

Unfortunately, many people suffering from a substance addiction also present specific co-occurring issues that go untreated. The abuse itself may cause some mental problems. Since many addicts do not receive long-term care for their substance abuse issues, the result is that the co-occurring mental health problems do not get adequate treatment.

Treatment Statistics for the OC

From 2011 to 2013, 56% of patients opted for an outpatient treatment program, while 44% of admissions belonged to residential programs which lasted more the one month.

These are the most common substances patients entering treatment programs usually abuse. While methamphetamine is the primary drug of choice throughout all ethnic groups, the second drug of choice differed from group to group. For instance, Whites were twice as likely than Hispanics to seek treatment for heroin.

The rates according to the abused substance:

The OCHCA reported that, as a general trend, treatment in an outpatient or long-term residential program has a positive effect on a patient’s quality of life. For instance, 53% of patients stopped using their primary drugs after treatment. Patients’ legal status also showed significant improvement, with 65% fewer arrests before discharge, 74% fewer jail sentences, 78% fewer prison sentences. Moreover, the behavioral therapy also had a positive effect on patients’ employment status as 107% more adults were employed after discharge.

These findings seem to be in accordance with the National Institute on Drug Abuse’s findings into the subject. Moreover, NIDA suggests that programs that offer more extensive forms of treatment (specifically a combination of medical and psychological treatment) have a higher success rate. According to the institute, effective substance treatment must:

Types of Programs in the OC

There are several options for people struggling with a substance-related addiction:

Apart from a variety of facilities offering services to help patients acquire a sober life, there are also multiple methods of therapy a patient can go through, sometimes in the course of the same treatment period.

Inpatient facilities have one of the highest success rates, as they allow patients to focus 24/7 on their recovery process. Potential patients must be admitted full time to the facility and follow a long-term (a month or longer, depending on their condition), of both medical and behavioral treatments.

During this time, patients are always supervised by a professional staff, and they will most likely follow a variety of programs such as meditation, yoga, or even some physical activity. Unfortunately, this is one of the more expensive treatment options, but many such clinics accept insurance.

Such centers are typically preferred by individuals who either cannot afford to follow an inpatient program or simply cannot detach themselves from their everyday lives. This is most common for single parents or sole caregivers for an elder or a child who cannot enroll in a 24/7 clinic.

A person that follows an outpatient treatment has to make regular visits to the clinic. Their frequency is usually established after an assessment of the patient’s condition. That way people can continue going to work or taking care of children or others found in their custody while also working on overcoming their condition. Patients can take part in such treatments after they have already gone through medical detox and withdrawal.

How Do These Stats Compare to Those of California and the US?

Except for a handful of exceptions, Orange County residents seem to have comparable or even lower rates of alcohol and substance abuse compared to state and national statistics. Reportedly 35% of Orange County adults used illicit drugs at least once in their life, compared to 49% at a national level. Regarding alcohol use, the data shows comparable results for county, state, and national sources, but the “binge drinking” rate in the OC is only half to those in California or the United States.

Moreover, non-medical use of prescription drugs (known now as a national opioid crisis), seems to be lower in the OC compared to the national statistics. Instead, methamphetamine usage rate is much higher in the county than compared to state and national usage, a pattern that has been steadily growing since 2002.

The notion that the Orange County stats are lower than state and nationwide alcohol and drug abuse trends cannot detract from the growing rates of substance abuse in the county. Several institutions concur that such behavior has been steadily growing in recent years, not just regarding usage or abuse, but also regarding visits to the E.R. because of injuries or overdoses.

Moreover, the data shows the number of deaths caused by drug overdoses is also increasing, so much so that the Orange County Health Care Agency and other authoritative institutions have called out for a solution. According to NIDA as well as the OCHCA, residential and outpatient programs have reportedly brought many success stories to the surface. There seems to be a consensus that long-term treatment that addresses multiple issues (the addiction itself and any underlying afflictions) has a higher success rate.

How Treatment Can Help

Treatment centers offer many levels of care in Orange County, guiding patients every step of the way towards a sober and better life. From medical detox to counseling, and various forms of therapies, all these methods are designed to help anyone move past their addiction and get a second chance.

If you or a loved one is suffering from such a condition, please don’t hesitate to reach out for help.