Recreational drugs like ecstasy are incredibly popular on the club scene and in nightclubs. It is estimated that 4% of people between the ages of 18 and 25 will use ecstasy at least once per year. This drug creates an intense, short-lived high and has similar effects on the body as amphetamine drugs. Ecstasy is popular in nightclubs and at concerts because it enhances the senses, and makes the user highly sociable.

Ecstasy is a type of substance called an entactogen, and these drugs increase a person’s ability to empathize and connect with other people. People can overdose on ecstasy because it dramatically increases a person’s core body temperature, and it also causes the user to lose track of time. Users can become dehydrated, overheated, and experience potentially fatal organ damage.

Ecstasy is an illicit street drug that is made out of MDMA or Molly. Molly is the powdered form of MDMA, while ecstasy is a tablet form that is mixed with other substances. Ecstasy is often laced with drugs like caffeine, meth, PCP, or cocaine.

When someone takes an ecstasy tablet, the brain is flooded with the neurotransmitter dopamine within a half hour to an hour. The high from ecstasy will peak within about two hours and can last for up to four hours, although there are lingering effects that can take up to twelve hours to subside. People will often take a second ecstasy tablet once an initial high wears off to prolong the euphoria. But this increases the chances of an overdose, and also prolongs the duration and the severity of a crash from ecstasy.

The short-term adverse effects of ecstasy include:

What are the long-term effects of ecstasy?

Because the drug significantly impacts the brain’s ability to produce the neurotransmitter dopamine, prolonged, heavy use of ecstasy can substantially impair the brain’s natural ability to regulate critical neurotransmitters in the body. Studies on people who’ve regularly abused ecstasy for two years demonstrated decreases in cognitive function. It is possible that these issues were caused by other drugs that are present in adulterated ecstasy tablets. Long-term ecstasy abuse can lead to impaired memory, and damage to the parts of the brain that regulate emotions, sleep and learning.

Why is long-term ecstasy abuse so dangerous? 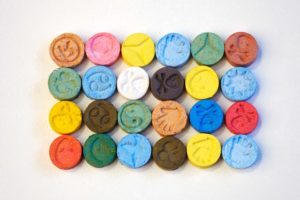 It is rare for someone to overdose and die from ecstasy directly, but regular use of the drug and binging on the drug can cause a range of adverse consequences. Acute problems associated with ecstasy use include hypertension, panic attacks, fainting, and seizures in rare instances.

Also, the way ecstasy is used increases the risk of certain health problems occurring. For one thing, ecstasy by itself will increase body temperature. People typically take ecstasy at night clubs and concerts where they will be dancing or otherwise physically exerting themselves.

Since the drug impairs the user’s ability to gauge time accurately, they can quickly become dehydrated, overheat, and faint from overexertion. This dangerous process can also cause muscle breakdown and an electrolyte imbalance, leading to kidney failure and swelling the brain. Studies have found that even modest doses of ecstasy and MDMA can reduce the heart’s ability to pump efficiently.

Who is most likely to use ecstasy and become addicted?

Research on ecstasy users has found that lifetime rates of ecstasy use are higher among females than males. This higher use of ecstasy among females persisted when researchers controlled for other factors such as household income, race and ethnicity, and the population density of the area where the study participants lived.

When it comes to drug addiction, no single factor can predict who will develop an addiction and who will not. Researchers have found that genetics may play a role in predicting addiction risk, but it’s not a 100% fool-proof way of determining addiction rates. There are a few risk factors that can increase the chances of a person becoming addicted to drugs:

Mental health disorders are a significant risk factor for addiction. People may not realize they have a mental health disorder, or they may feel stigmatized for it and not reach out for help. There are also many financial and systemic barriers to treatment. For many people, drugs and alcohol are more readily available than comprehensive and integrated mental health treatment options. To alleviate distressing symptoms, people will turn to drugs or alcohol for quick relief. Unfortunately, this compounds the issue and also puts someone at risk for dependence. Drug and alcohol abuse can also worsen existing mental health symptoms, or trigger new ones. It’s imperative that someone who is struggling with dependence and addiction to ecstasy gets help for substance use disorder.

What kind of help is available for people who are addicted to ecstasy?

Treating an addiction to ecstasy is similar to treating addiction for other drugs and alcohol. Although ecstasy addiction is rare, dependence on the drug and heavy, long-term use can cause severe damage to someone’s mental and physical health. Attending a detox and rehabilitation center can help someone break the cycle of addiction and heal.

In rehab, patients are given access to a team of qualified, experienced mental health professionals, doctors, and supportive therapists. Patients can detox from the substance in a drug-free, safe environment where they can recover without the presence of harmful, outside influences. During rehab, patients can work closely with a therapist to uncover their triggers for drug use, and also receive treatment for any mental health disorders or emotional problems that may be contributing to addiction.

If you or a loved one are struggling with a dependence on ecstasy, please contact Windward Way today. Representatives are standing by to answer your questions about detox, rehab, and mental health therapy.