Heroin is part of the opiate class of drugs and an illicit street drug. Derived from the opium poppy, this class of drugs includes morphine and prescription opioid derivatives such as fentanyl and oxycodone. A significant majority of people addicted to heroin started as a last resort to feed their prescription opiate habit. Over 170,000 people between the ages of 18 and 25 started using heroin for the first time in 2016.

Heroin users will often engage in risky behavior to feed their drug habit. They may experience financial difficulties and legal problems. Also, their school or work performance will suffer, and they may find themselves job-hopping or failing classes. Relationships will become strained, and users may become isolated from friends and family.

Long-term signs of heroin addiction may include digestive problems, and if the person injects the drug, collapsed veins or boils and infections at the injection site. 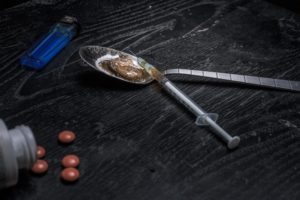 Heroin can be ingested, snorted, smoked, or injected with a syringe. It does not give off much of an odor when smoked. Heroin and opioid derivatives are incredibly addictive, and create a massive, euphoric high and feelings of well-being, not to mention these types of drugs are very effective at treating the physical pain of all kinds.

But, the high from heroin doesn’t last long, and users quickly find themselves taking more and more of the drug at frequent intervals to feel a sense of normalcy, even if their tolerance has become so high that they no longer experience much of that initial euphoric rush.

Heroin binds to specific receptors in the brain which essentially rewire it to seek out more of the drug. Once a person recovers from heroin, they may experience chronic depression and anxiety since their dopamine receptors were rewired from drug use.

What is the timeline for heroin addiction withdrawal?

The timeline for heroin withdrawal depends on how the person has used the drug. Most will experience withdrawals for about a week, but longer-term users may experience the effects for up to a month after cessation.

Withdrawal symptoms will start within 24 hours of last use and will peak within three days. This is when the user is at the highest risk of relapse since the withdrawal symptoms are unpleasant and painful. It’s incredibly important that recovering users have adequate support and medical attention during this critical phase.

Withdrawal symptoms can include the following:

What are the dangers of overdosing on heroin?

According to the CDC, heroin overdose deaths rose 20% from 2014 to 2015. Overdosing on heroin can cause a dangerous fall in the user’s blood pressure, heart rate, and respiratory rate. Users can experience seizures, choke on their vomit, and die. Symptoms of a heroin overdose include:

After ten minutes of injecting heroin, signs of an overdose can occur. Users who have quit the drug but are undergoing a relapse are at incredibly high risk of overdosing. If an overdose is suspected, immediately call 911.

How are infectious diseases spread among heroin users?

Heroin is often injected via syringe or hypodermic needle. Users are obsessed with getting their next fix, which inevitably leads to not practicing safety precautions. They will share needles between each other. Dirty needles can carry dangerous blood-borne illnesses, like hepatitis C, AIDS, or HIV.

In addition, heroin gives users a feeling of euphoria and increased well-being, and they will not practice safe sex. Heroin addicts are therefore at an increased risk of contracting and spreading STIs.

Heroin use among young adults is rising, the effects on the individual, their family, and society-at-large are devastating. Recovered addicts may experience long-term, adverse health consequences related to their drug use. The sooner they can seek treatment and heal, the less likely they are to experience lifelong, damaging effects of heroin use.

With a medical detox facility, addicts can safely withdraw from the drug. The medical staff is on-call 24/7 to help them with painful and distressing symptoms. Addicts can be prescribed legal drugs to lessen the severity of withdrawal symptoms, and this will, in turn, lower their risk of relapse.

After safely detoxing, people in recovery can receive supportive treatment from trained therapists in an inpatient or outpatient facility. With time, support, and determination, people can go on to make a lifelong recovery from heroin addiction.

Heroin use has recently exploded within our country. The men who find themselves dependent on this drug never thought it could happen to them. Or, at least they believed they could handle the drug’s addictive effects. An addiction treatment program at Windward Way can help you or someone you care about get off heroin for good.

Some of the early signs of heroin addiction include:

Complications and Side Effects of Heroin Addiction

Heroin abuse is inherently dangerous. Since it’s an illegal drug, an abuser often doesn’t know the dose, source, or if even it’s heroin they are smoking, snorting or injecting.

Since heroin goes straight to the receptors in the human brain that influence comfort and reward, people who have been using this illegal opioid find it exceedingly hard to quit. Withdrawal from heroin use can be extremely difficult—insomnia, profuse sweating, pain, intense anxiety, and drug craving are common.

Thankfully, Windward Way’s clinically supervised heroin detox center and drug rehab can give you exactly the help you’re looking for. Don’t hesitate, call us today and we can fully explain to you all the advantages of our program compared to the mostly generic, “cookie cutter” heroin rehabs you’ll find. Here’s our number: 855-491-7694.